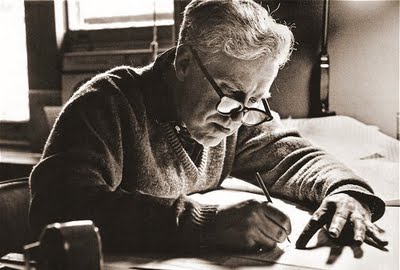 Today, December 11th, 2011 marks the 103rd birthday of Elliott Carter, one of America’s foremost living composers.  And not only has Elliott Carter surpassed 100 years of age, but he’s remained artistically active from before World War Two to the present day.  Carter studied with Walter Piston and Gustav Holst in Boston before moving to Paris to study with Nadia Boulanger in the 1930’s.   Since then, he’s had over 70 years of artistic productivity, something any of us I think would count as an absolute blessing!  In the past 3 years alone, he’s composed over 14 works for wind ensemble, individual instruments and even voice and chamber orchestra and more, a feat I am certainly envious of in my 30’s.

There’s been a lot of talk in the jazz world of late regarding cultural roots and such, and there certainly is a validity and point to categorizing music as a cultural phenomenon.  But to me, very often, the worth of an artist needs no cultural justification and an artist’s output transcends his time and place; merely being a creative individual producing works that have artistic merit is in itself enough for me.  For example, what I think is important about JS Bach is his monumental contribution to counterpoint and the genius of his works; the fact that many of his works were religiously based or that he was an 18th century German I view of secondary importance.  Bach’s achievements transcend his time, the Baroque movement, and 18th century Germany and Europe.  Does he stand as the summum bonum of German Baroque music? Yes, but in my view, his music transcends that and stands timeless, in and of itself.   I suppose in this view, I stand more with individualists like Nietzsche, Emerson, Ives and Nancarrow, though I don’t care to make all sweeping statements regarding cultural heritage and its relationship to music; for example, folk music is precisely its name, a music born of a specific cultural heritage, geographical area, and time, as in the case of the blues or Greek rembetika.  So I am not saying that we can simply separate music from the culture in which it is birthed, but I am saying that music can transcend its time and place.

For me, Elliott Carter stands as a modern example of that individualism I speak of.  He represents the artist as an individual, honing his craft and continually pushing the envelope of the music he creates, seeking to expand the medium past 100 years of age. He did not partake in a serialist tradition, although I am sure there are other ways we could quantify his work (as in a 20th century New York City urbanite…incidentally, Carter does quantify himself as an “American” composer and compares his compositions to the jazz idiom utilizing a “written out improvisation”).  He has continually sought his own unique vocabulary and way of approaching music, phrasing, and more as he has explored sonorities, soundscapes, and textures. But through all that, you can somehow hear that this is a man that has digested counterpoint, polyphony, and classical form on a deep level. As such, I don’t even feel I have to even like Carter’s music to recognize that it stands for something of great value.  In fact, Carter is not someone I listen to on a regular basis or find great beauty in (as I would Messiaen, Morton Feldman or Takemitsu); I place Carter in the “research and development” category of my listening: music I listen to in order to expand my ears, get new ideas, and break myself out of the sounds I’ve been hearing and producing.  There is certainly a beauty in some of his works, but not any kind of lyricism or groove/pulse that I can identify with; and ironically, this is precisely his allure for me.

What always strikes me about Carter’s music are the visceral sound clouds, the tension and release he creates without delving into traditional harmony, nor serialism or random abstractness.  Yet there are always enough structural elements in his works to draw me in and intrigue me. In his own words, “Every composition I write has to be an adventure.”  I think no more words are needed.  And even if his music doesn’t aesthetically entice you, I think we can all pay homage to a man who has successfully dedicated himself to an artform for over 70 years without pandering to popularity or giving up the desire to explore music and push his own boundaries.  In fact, Carter cites his composing as a reason to live. I believe that in itself is of the utmost value to society and the world, whether we listen to his music or not.  May Mr Carter’s journey continue for many more years!

This week’s musical offering includes a few bootlegs I’ve acquired over the years from various concerts, including his Dialogues for Piano and Orchestra,  Duo for Violin and Piano (featuring Pierre-Laurent Aimard),  Mosaic for Harp and Chamber Ensemble,  his Flute Concerto and more.  Enjoy!

you can find him interviewed on Charlie Rose here:

I live a double life as a jazz doublebassist and composer as well as a software developer/data scientist in NYC END_OF_DOCUMENT_TOKEN_TO_BE_REPLACED
This entry was posted on Sunday, December 11th, 2011 at 9:39 am and tagged with classical, composer, culture, Elliott Carter, individualism and posted in In the Listening Room. You can follow any responses to this entry through the RSS 2.0 feed.
« Jump Point
Live: Sam Rivers and Paul Motian »